One of the unique features of airmen serving a wireless trade, is that they wear a badge on the sleeve of their uniform, to signify their belonging to any of the several radio and radar trades. It was the first trade badge to be authorised the the Royal Air Force.

A consensus of opinion suggests that originally these were worn by signalers. Up until 1918, ordinary ranks could not address an officer without first speaking to an NCO. Through the first World War, for the first time, this was often found obstructive when many things were happening at once. Consider that the first world war was the first war to simultaneously utilise no less than three armed forces in the same war. Fast effective and efficient correspondence was necessary to co-ordinate their efforts. A signaler wishing to pass on vital information then, had first to pass it on to the corporal, who then passed it to a sergeant, from whom it was given to the relevant officer, a clumsy arrangement and fraught with problems if the message was verbal!!

on 18th September 1918, The Air ministry, in it’s wisdom, came up with this solution. Signalers would be issued with a cloth badge, originally in red worsted embroidery, to be worn on their tunic, giving the wearer the authority to speak, address or pass on, a communication of any sort, directly. The same badge, while the wearer was on duty, would also excuse them from repeatedly saluting the officer(s), if there were more than one ‘over’ in the messaging sequence.

There exists Ministry of Supply and Air Ministry documents showing that this badge was manufactured and issued, but nothing stated officially about the reason for issue, it seems they were just ‘Generally Accepted’ rules of conduct. The badge is in use, in today’s Royal Air Force and an example of the documentation is shown below. 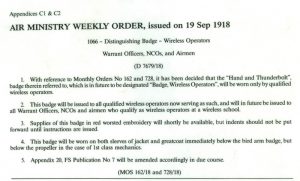 It was later worn by air gunners who combined the duties of wireless operators while flying, and was soon being worn by anyone who could claim the remotest connection with wireless and electricity, becoming known as the “Sparks” badge. Its proliferation was encouraged by numerous unauthorized versions produced privately, such as the fist being replaced by RO for Radio Operators, WM for Wireless Mechanics and E for Electricians. There was a proposal in 1949 to abolish the badge but it survived, and in 1951 was authorised for wear by airmen and airwomen of all the ground signalling and radio engineering trade groups with the requisite pass on their basic training course.